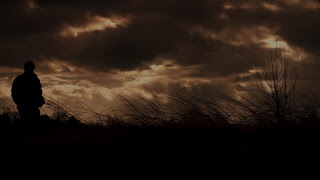 The name Adam Barnick is one that many a self-respecting horror nerds is very familiar with.  He has worked with some of the finest names in horror today...doing the superb documentaries on Adam Green's Frozen, as well as providing extra features on Paul Solet's Grace and Stevan Mena's wicked follow up to Bereavement - Malevolence.

Never one to avoid a challenge, he recently shot the super cool video to John Presnell's Say You'll Stay and has another two lined up as well!

To add to this, he has a totally rad new challenge, and wants YOU to help out and be a part of it!!!

I've been an admirer of Rivulets aka musician Nathan Amundson for years. His music has brought me up, brought me down (in the best possible way), inspired numerous writings and images, and at the same time his work always felt familiar to me; like the aural equivalent of the visual style I've pursued and explored for quite some time.


While he's got a decent following in Europe and other countries, he still seems a bit of a well-kept secret on this continent; I love the idea that a collaboration with him could be the thing to introduce more people to his work. And that he was open to said collaboration in the first place.

A couple of years ago, I reached out to him about creating some music videos for him, I'd certainly created enough of them in my head based on his songs.. he liked my visions for the songs I'd chosen, and I was off and running. But financing even low-budget videos when your resources are spare is as tough as it gets; add to that numerous setbacks and obstacles I won't waste your time with; and it's ended up being far longer than anticipated to even get halfway to this goal.

I'm no stranger to not giving up and pushing until the universe relents just a little bit and lets something creatively happen in my life. Every day's a new struggle but I knew that going in; every dedicated filmmaker does. But I wanted to see if between his fans and admirers of my work, we could come up with enough of the funding needed to complete these projects this year.

While both videos remain minimalist and aren't as spectacle-filled or kinetic as your typical music vid, we do want them to rise above the usual look of a low-budget effort. "I Don't Want to Be Found" is primarily a musical performance video, but exploring anonymity and escape from one's surroundings through just a few key images, leaving the rest implied. "How, Who" flips that structure on its head, telling its tale largely through a funerary procession in Civil War-era times, with period piece locations and costuming, all told in a chillingly cold black and white with overtones of Dreyer's VAMPYR.

Morley - The team you've put together for these videos is fan~fucking~tastic, how did you come about putting together such a totally rad team? :)


The Barnipede - Different places; Jeremiah Kipp is an extremely talented director/writer, but I met him when he interviewed me for Fangoria, back when they picked up my short fillm MAINSTREAM for distribution on the Blood Drive II DVD. So I've known him a while, and he's been eager to see me bring newer projects about, and he graciously stepped in to help on this project.

Dominick I actually knew socially from a few years back, before he got the film bug. Didn't see him for a few years, but I started hearing how he was already shooting films, commercials etc. and was quickly becoming a prodigy in his field. When I was getting ready to start our production, I approached them both(they were both by now collaborating together on films), and I'm grateful they were into the idea and on helping out.

Jessica I'd met briefly a few years ago too, and was re-introduced to her last year.. she was doing a lot of script supervisor work, in preparation for a move out West. But last Spring (before our productions were delayed until this year) she approached us about helping out in general, just to get more set experience. She managed to be incredibly resourceful and ambitious, and quickly found many of the things we needed, like effective costumes and key locations in the NYC area that matched exactly the period detail I was hoping to find.

You've only got a handful of hours left to help with this campaign (I've been very, very busy as of late!!), so if you've got some spare pennies and would like to be part of this awesome collaboration then please donate to the IndieGoGo campaign NOW!!!   There are some awesome perks and it's always good to help out a Barnipede in need, heehee!!  You can watch the splendiferously awesome campaign pitch and donate HERE.  As I said before, the team he's put together to make these videos is fucking gigantic quantities of awesomeness and RAD, RAD, RAAAAAAAD!!!  :D
Posted by morleysaurus at 21:09 No comments: