Losing Opie was the Ultimate Catalyst towards Barbaric Destruction. What's Next for Jax Teller?? 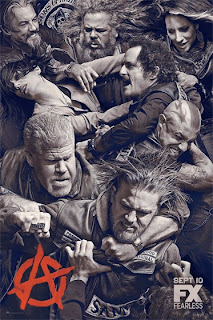 So with only 4 more days to go till the return of everyone's favourite bikers....just what's gonna happen after such an explosive season 5 finale?!!  The death of Opie was clearly the huge catalyst and changing point for Jax last season.  After witnessing his best friend die, Jax knew things were going to have to change.  I guess he just didn't realise how much his moods and the external things going on around him, were actually having such a huge affect on Tara and the kids.  And I will put my hand up and say this now...yes, I am a hard core Jax loving fan girl....but if he's a dick to Tara...I might just find myself not quite as in love with him for a wee bit of time.  Lol.

Anyhoo, I found this wicked video online and just had to share it.

I then found a nice Jax and Opie video...those two really did love each other.  Guess what makes Jax's transition so much harder.  Anyhoo, enjoy away.  And if you have any video's you want me to share, just give me a shout.  I don't mind these chores...honest!!! ;)  HA!! :)A Hike Director Jennifer Campbell Gets Even More Fucked Up With Her New Short Bruised!! 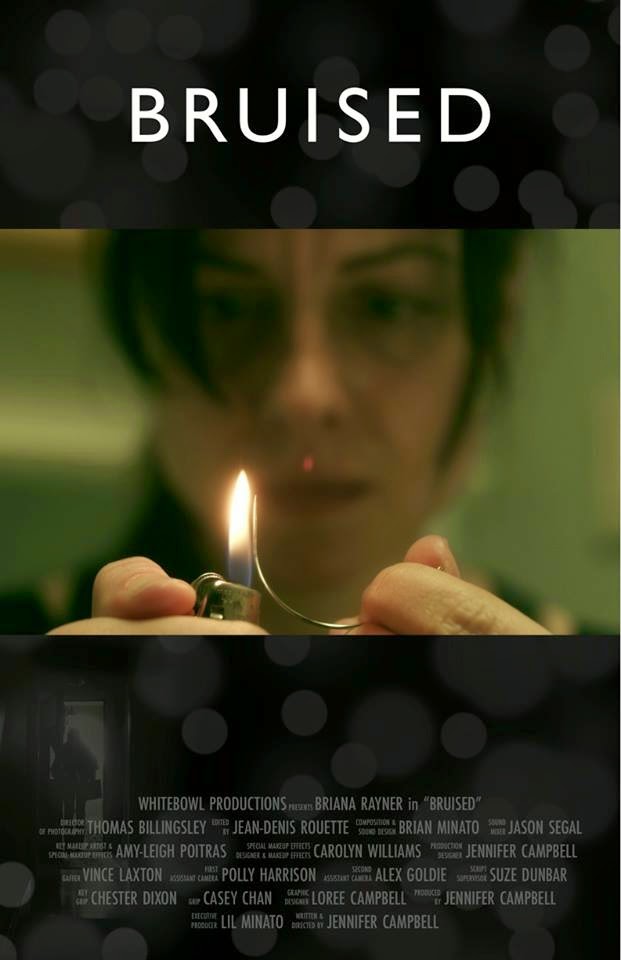 Women in Horror Recognition Month has been so good for me on so many levels....the main one, all the wicked female friends I've met in the process.  :)  One of my all time favourites is Vancouver based Hike director Jennifer Campbell.  I have come to view this awesome chickaroo as one of my best friends.  When she sent me the script for Bruised last year, due to personal things/accidents happening to me - I completely related to so many of the words coming off the page. 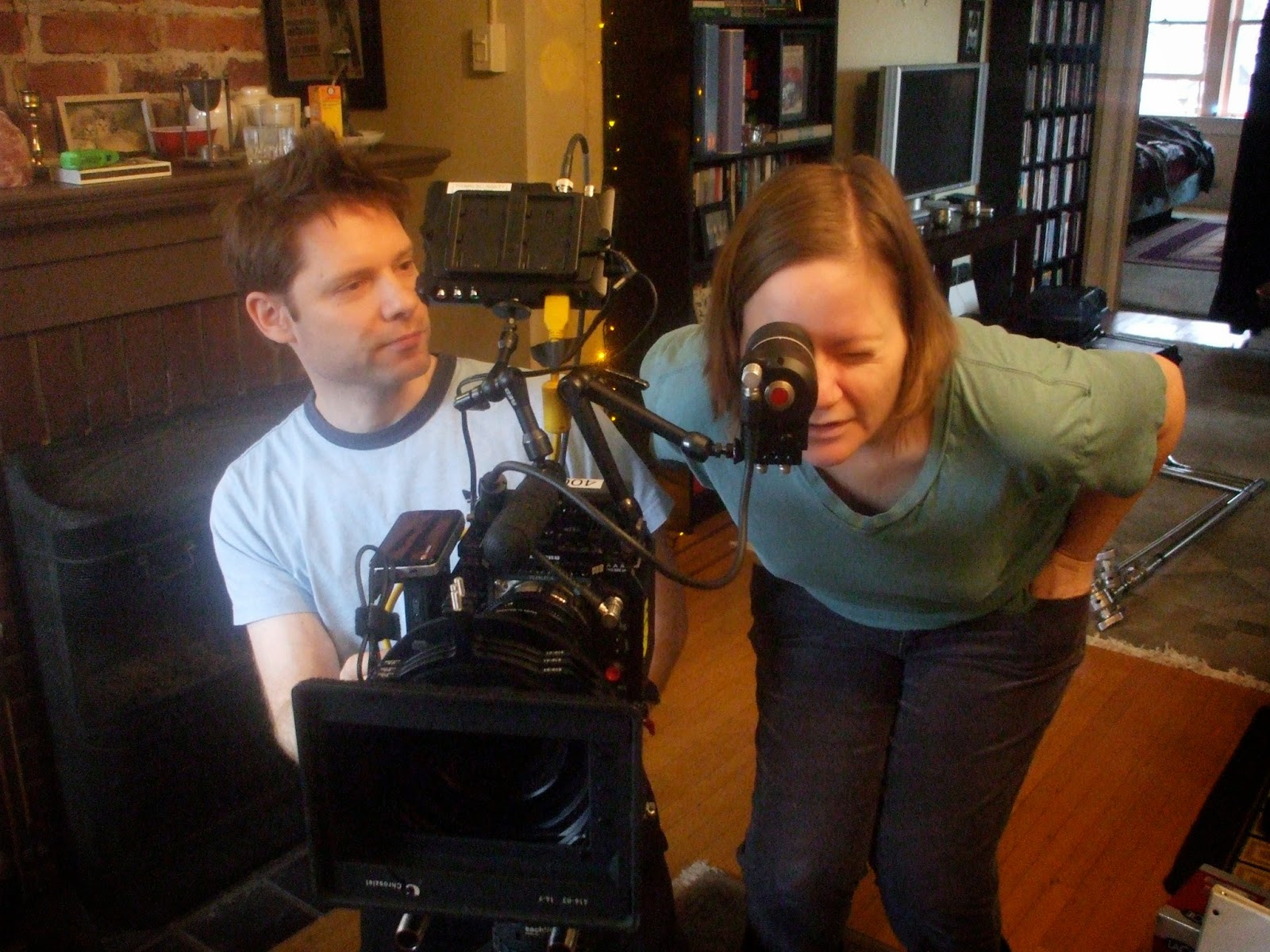 With dorky excitement I can now officially say that the actual final short...holy fuck.  This may have been done by a chick who has now become an amazing friend of mine...however, as she is my friend....I would also be the first to give constructive criticism to anything she did.  And I would expect the same in return. 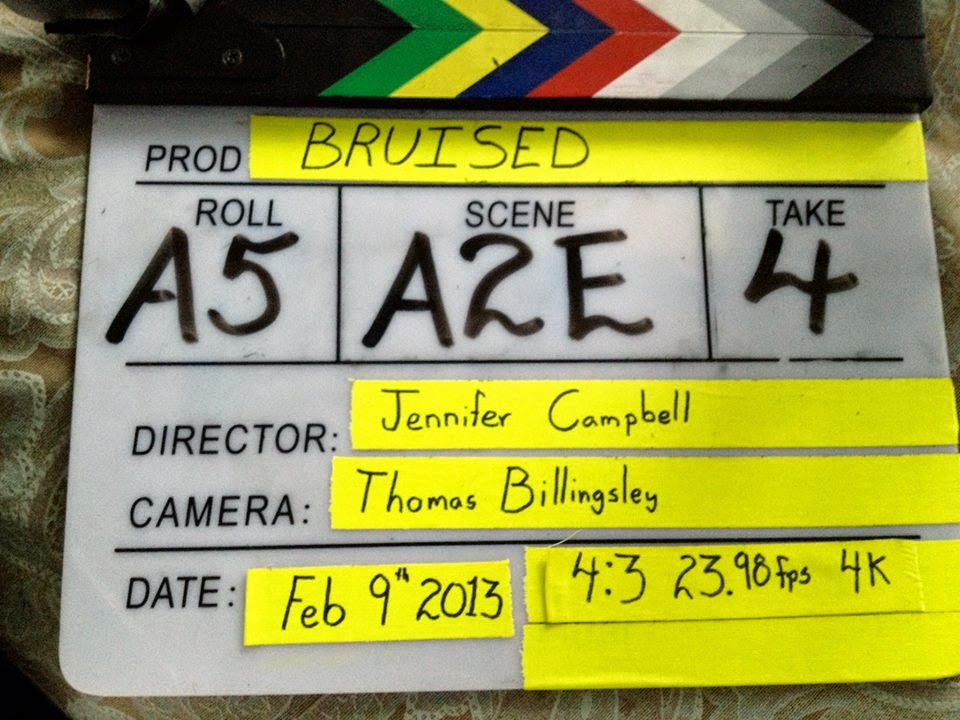 Bruised; Jennifer's follow up to debut short Hike...well, to be quite frank....it's fucking epic!!!!  I could feel how personal this story was to Ms Campbell, and whilst her brutal, yet frank honesty left our protagonist in an incredibly vulnerable yet fucked up situation....I felt it was one that as a viewer, I could still relate to, on so many levels.

For a director to actually pull this story off; and with such subtle beauty...it does show a rare talent.  What makes Jennifer Campbell such a wicked (well apart from having the same initials as me and coming from Vancouver.....EEEEEEE!!!!) individual, it's the fact that she's clearly lived through some sort of horrific injury...and knows exactly how it feels.  Bruised is a statement against the healthcare system in America, and in so many places across the globe...you could be dying, or suffering from the most horrific illness, yet if you can't pay for an operation; either get yourself into a shit ton of debt, die...or try some D.I.Y/backstreet operation...from which you'll probably die anyway. 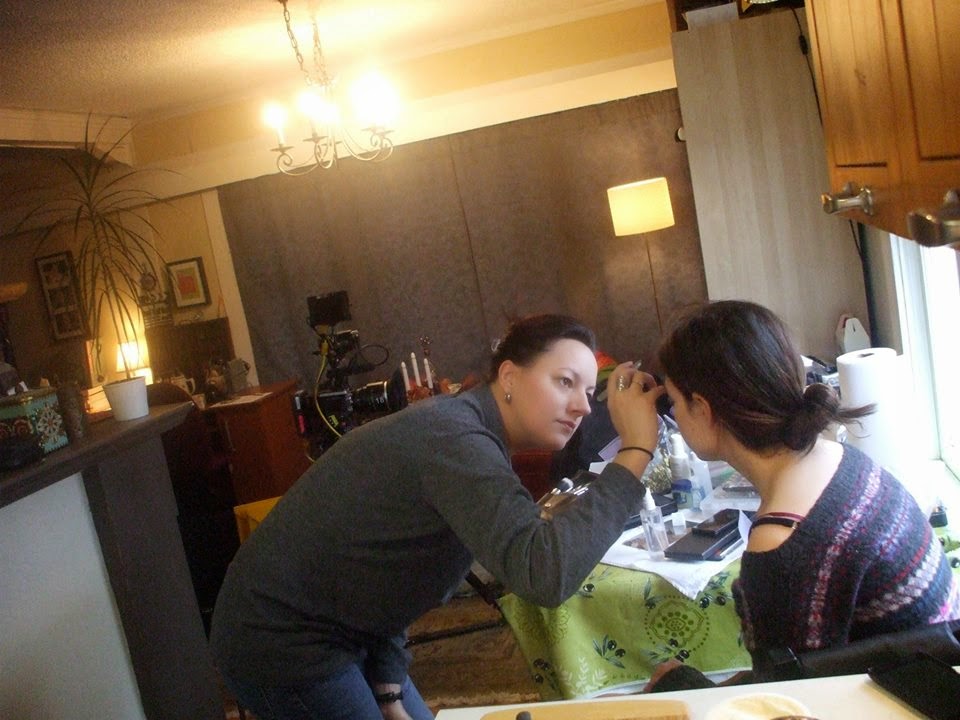 I hear time and time again about friends in the States who can't afford health care, and it's for stuff like cancer treatment, or to save their newborn baby's life.  I mean, what the fuck!?!!  I know we take the NHS for granted over here in the UK, and I know we moan like crazy about it....but least we have it!!  Within the past year, I've been taken into A & E for three pretty serious injuries....ones with follow up treatment as well.  If I'd have had to pay for that...well, there's no way I'd be able to afford that.  I also know that my brain is a hell of a lot more fucked than most, so I'd totally be attempting something a bit more ad hoc to deal with whatever situation was thrown at me.

In fact, one of the things that drew me so much to this script in the first place, was that as a child, I had a boil on the side of my leg.  Most kids go to the doctors.  What did I do??  I took the scalpel out of my microscope set and cut it off myself.  Now some may deem that to be ever so slightly fucking crazy, but hey ho....left me with less of a scar than any hospital scar.  Haha.  Anyhoo, between that morbid memory and the recollection of going to hospital/seeing a nurse for 5 freakin' months after I burned myself...I know what it's like to have all sorts of fucked up problems.  Be it burns, back injuries, cracking ones skull open and suffering from a severe concussion...you name it...I've probably done it at some point!  ;) 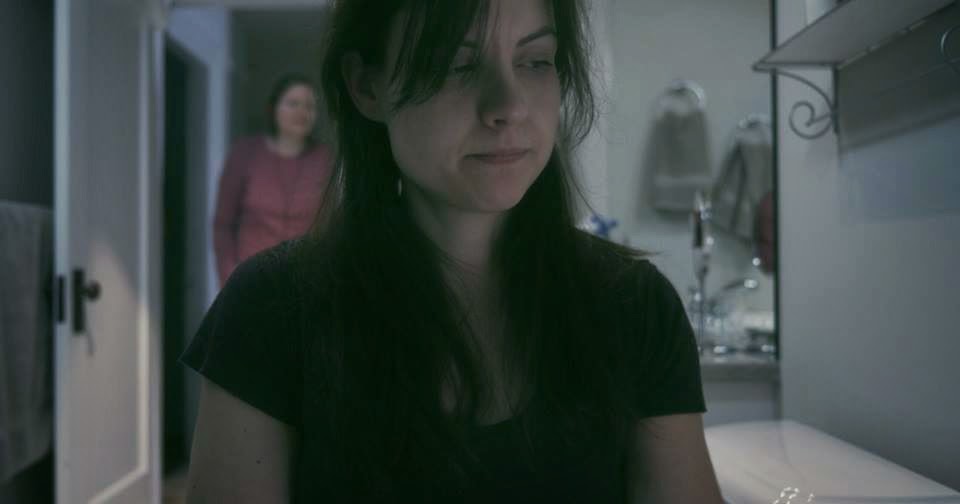 Jennifer Campbell is a director that one definitely needs to keep ones peepers on.  She is a rare and beautiful talent, and one whom given the opportunity, could totally follow her fell Vancourites Jen and Sylvia Soska in creating a wonderful, yet completely demented movie.

Briana Rayner, is also a name you really need to take stock of.  This chick pulled off an insanely intense script...and it's just her.  Everything at the end of the day lands on her.  And she's fucking amazing! 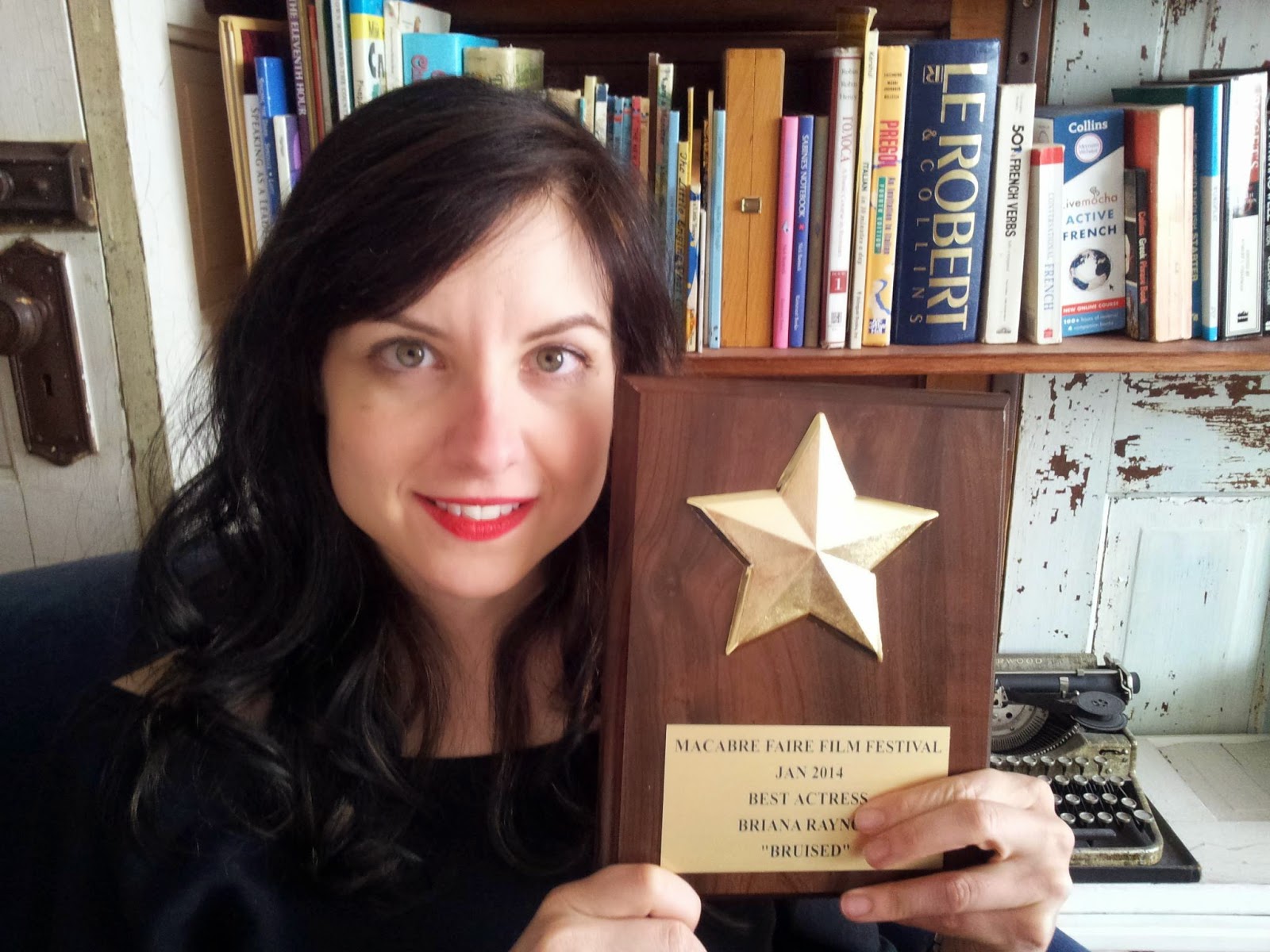 I view a lot of shorts for my film festival Jennifer's Bodies, from women from all walks of life.  Bruised is definitely in my top 5...not even from just the past year...possibly even past two years.  I felt an intensity to this story that sucked me in...Oz style!!  Thankfully there was no flying monkeys though....then I would have been REALLY scared!!  Haha.  I'm sure those who know me will find this amusing though - whilst watching Bruised, sitting on my bed propped up on a pillow....I actually nearly fell off my bed as I cringed at one scene.  That is all I'm going to say.  And trust me...it is extremely difficult to even freak me out...let alone almost knock me flying off my pillow stool.  Haha.  ;)

I assure you that Bruised is a flick that has to be seen. Be sure to click on THIS LINK to get to the Facebook fan page for the short.  And be sure to clicky on the LIKE button...and share, share, share.  :)  She also has a Twitter page where you can check out @_BRUISED_.  You can also check out the trailer for the short just below.  Keep updated with the flick and hopefully you shall be catching it at a festival near you in the very near future.  :)

Jennifer Campbell is a name that all y'all horror kids need to remember.  And clearly the guys behind the Pollygrind Fesitval in Las Vegas understood how wicked she was after they awarded her the prize for Best Woman Director in the shorts category for her last short film Hike.  Hike also led to Jen being awarded for the most Over the Top FX at last years Stilleto Film Festival.  :)  So basically, this girl is fucking rad and the sooner everyone realises this, the more gore~geously enriched ones life shall become!!  Mmmm'kay!!?!! ;)
Posted by morleysaurus at 22:12 No comments: