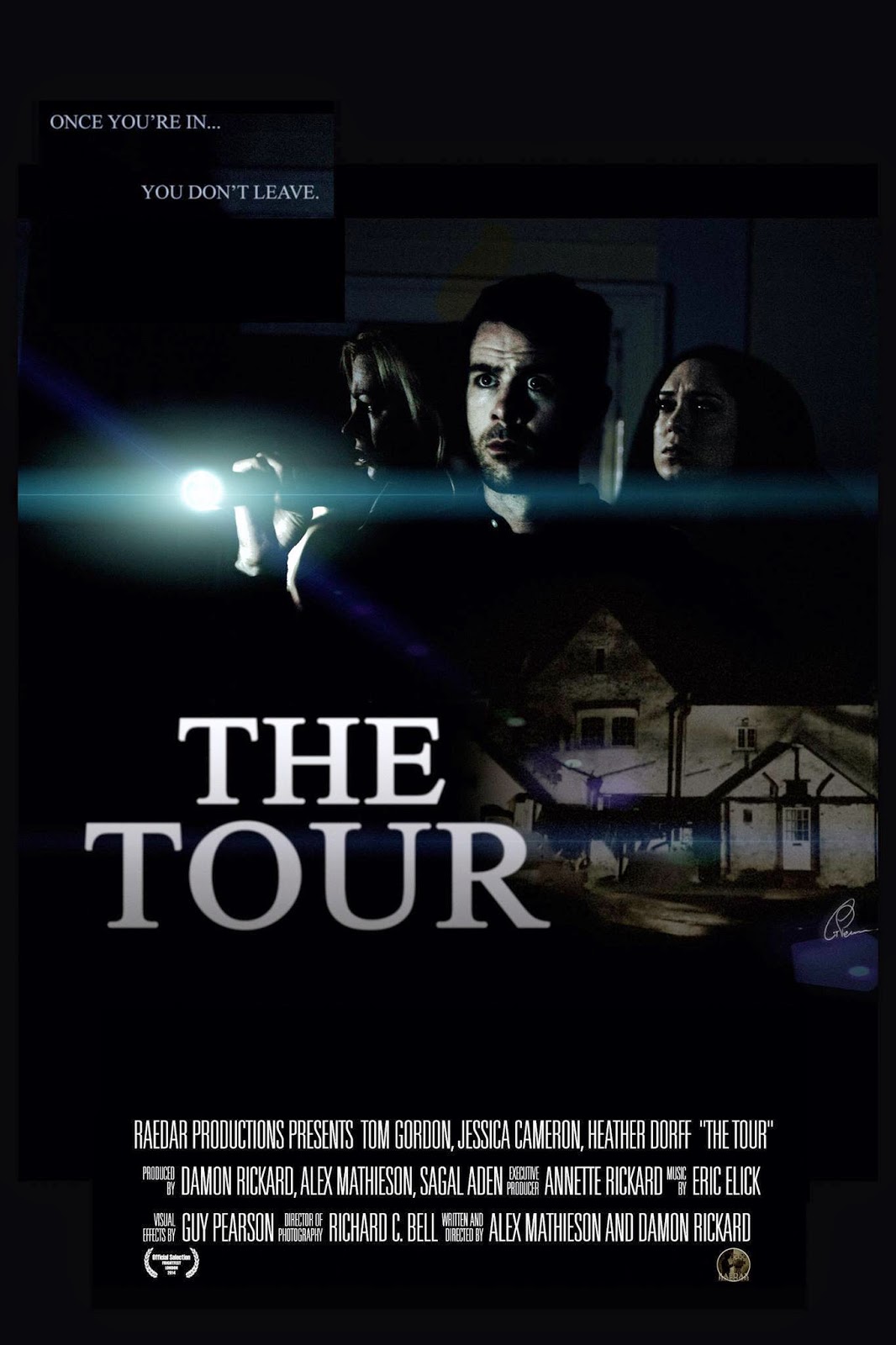 If there's one thing I'm a total sucker for, it's a good old ghost movie.  Ever since I was really young, I've always had a thing about ghosts.  Poltergeist still remains one of the few films to ever freak the shit outta me.  I was 6 when I watched it, and had an INCREDIBLY overactive imagination.  Haha.  Or IMAGINAAAAAAATION, as Spongebob would say!  ;)  The Blair Witch Project (next to The Wizard of Oz, haha) is definitely my scariest film of all time.  That film fucked with my head so badly, and even to this day, it terrifies the crap out of me watching it!!  Yet I can watch all manner of fucked up, insane "scary" films, and not flinch. 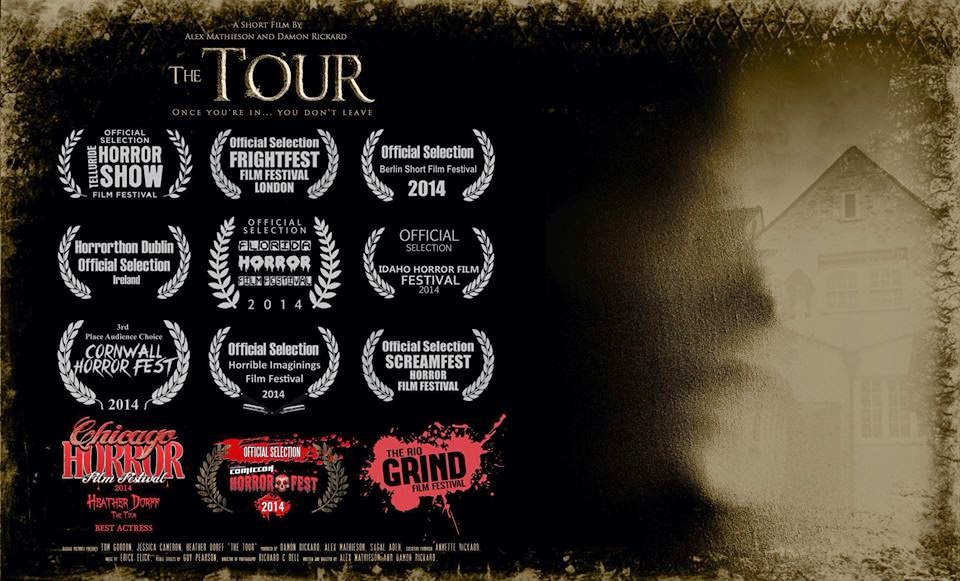 Damon Rickard and Alex Mathison's The Tour, pays homage to films such as The Blair Witch Project and Hostel, whilst taking on the good old fashioned ghost story, and making a truly entertaining little film out of it!

Kudos to guys for such an entertaining and well-written script as well.  I think that's often the problem with ghost stories...is that they rely too much on cheap scares, and not enough on an actual script!  The Tour most definitely does NOT fall into that category.  There is an art to writing a good short ghosty film (or any short film for that matter!), and coming in at just under fifteen minutes, The Tour is the perfect example of how to do this.  Right from the get go, The Tour pulls you in with its quirky, spook~tastic ghost story, which is made all the more believable by entertaining tour guide Tom...the kinda tour guide that would make you stand there and pay attention.  One that, if  you were like me...you'd want to go and further investigate. 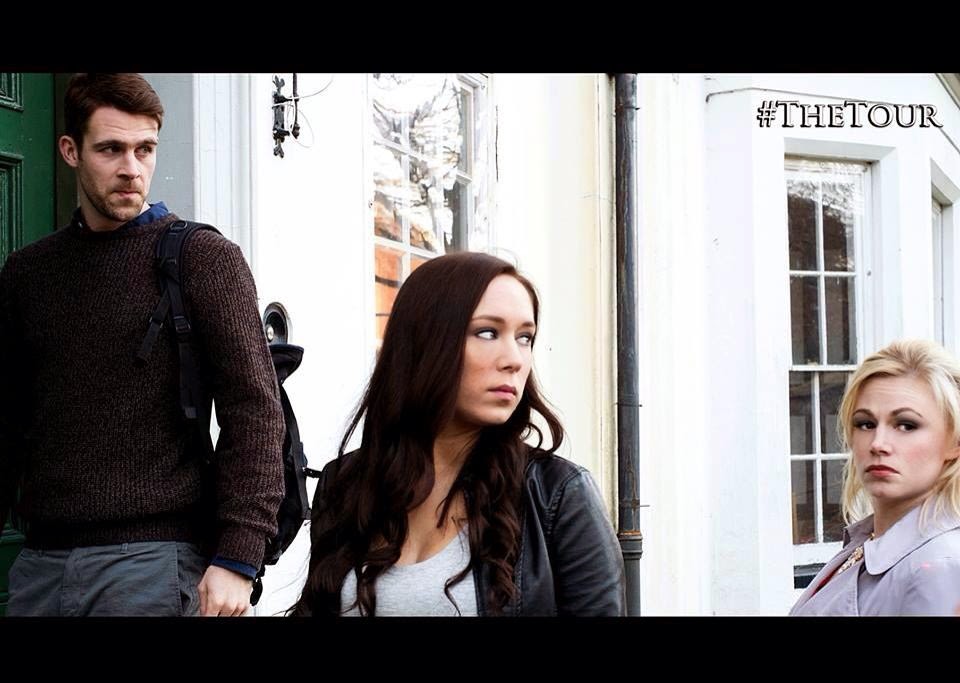 There is this brilliantly delivered line by Tom Gordon's tour guide character Tom about trips across Europe, and what might happen...referring to Hostel of course.  Straight away I'm thinking, "Hells yeaaaaaah!!  My kinda tour guide!!"  ;)  Which totally just reminded me of when my fellow X Phile/Women in Horror chick, Nia Edwards-Behi and I were in the London Dungeon and we were in the Jack the Ripper bit.  The actor dude really did choose the wrong person when he chose to try and scare me.  He came up behind me and put his hand around my neck and said whatever....how do I reply... "Ooh baby I like it raw!!"  Much to Nia and her friend Yvonne's bemusement.  Mwahahahaha. 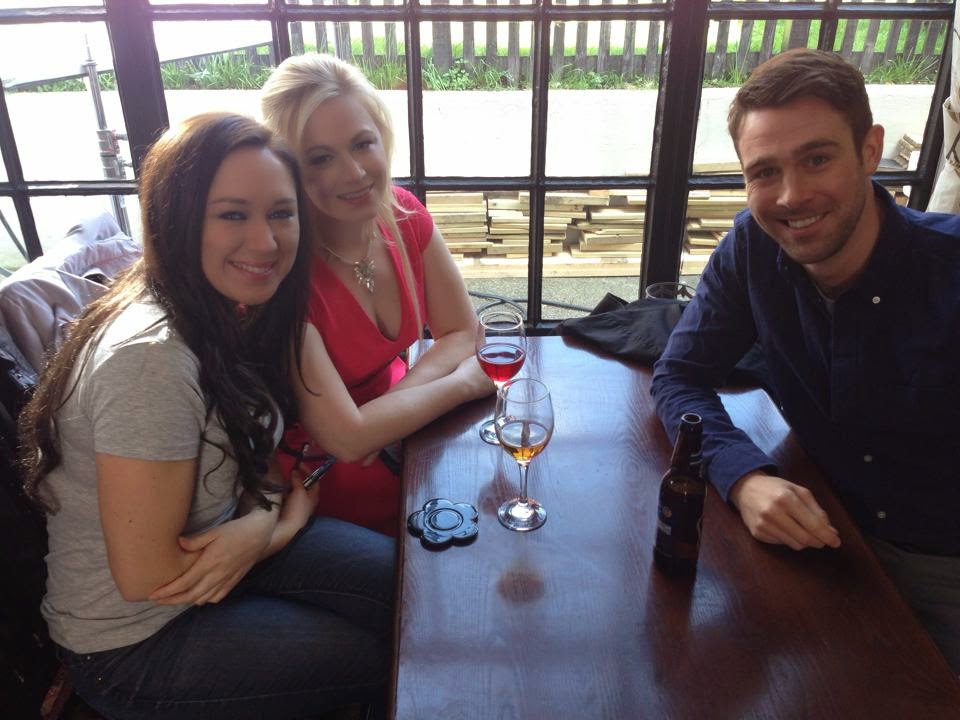 Newcomer Tom Gordon was absolutely brilliant, and definitely one who I'd like to see act in more films.  Heather Dorff and Jessica Cameron were totally awesome as well.  You can tell they had a lot of fun doing this....and it was good to see them mixing up and doing a bit of role reversal to their usual kinda roles.  It was also cool to see my English and American/Canadian friends teaming up to make a film over in the UK as well....usually it's the other way round!

For more information about The Tour and places where you can see it, go and LIKE the Official Facebook page, and be sure to also check out composer Eric Elick's music page also...this is a guy you need to look out for peeps.  :)
Speaking of teaming up, and Heather Dorff and Jessica Cameron....and a chance to see The Tour...Scottish director Andy Stewart is hosting a fundraising evening this coming Thursday, the 5th March to raise funds for his new film Redacted....starring the lovely Tristan Risk.

Not only will you get a chance to see The Tour, you will also get to check out Andy's AMAZING Ink, as well as Redacted stars Tristan Risk and Laurence R. Harvey starring Call Girl, and several other wicked short films.  :) For a mere £3 you get to watch a bunch of awesome short horror films, and there will be a DJ, a raffle and lots of other fun stuff....including a possible SPECIAL GUEST!!!  Come and join us at Glasgow's Drury Street Bar and Kitchen.

We will also be pouring our own specially-brewed, red IPA, Shining Examp-Ale on the night.
The short films we will be showing are as follows:
CALL GIRL (Jill Sixx Gevargizian, US) DONE IN (Adam Stephen Kelly, UK) THE TOUR (Damon Rickard/Alex Mathieson, UK) INK (Andy Stewart, UK) AUTUMN HARVEST (Fredrik S. Hana, Norway) THE STOMACH (Ben Steiner, UK) Doors at 7, Films at 8, boozing until midnight. Come on down!

Posted by morleysaurus at 17:44 No comments: Links to this post

Trailer for Justin Benson and Aaron Moorhead's New Horror Flick Spring is HERE.....and it is AWESOME!!

I fucking LOVE Justin Benson and Aaron Moorhead.  They're just fucking ace, and such talented guys as well, with so much potential for their future.  :) 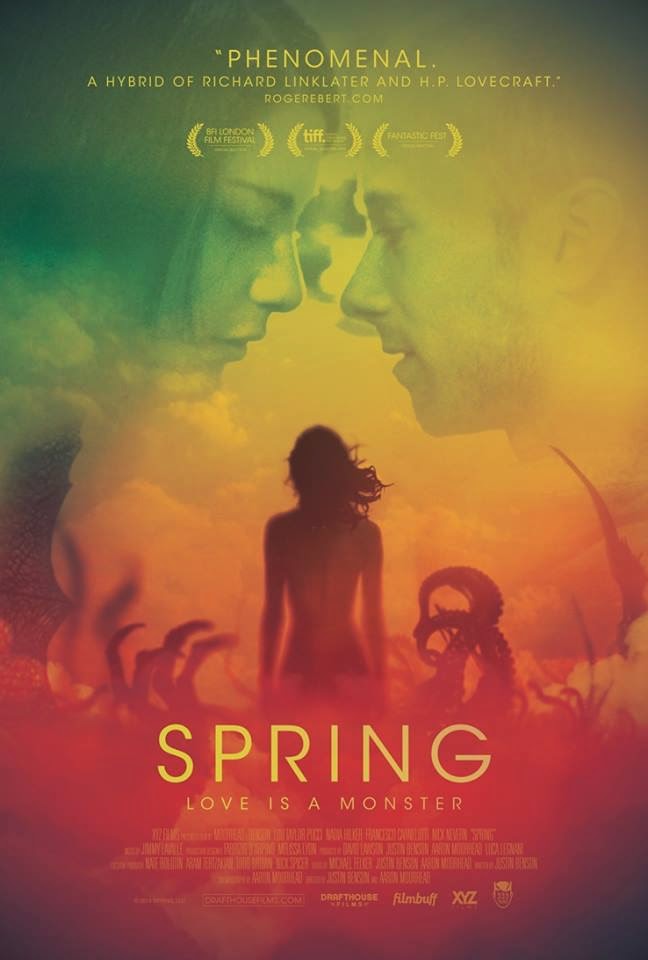 Following up their insanely brilliant, and justifiably successful debut feature, Resolution; Justin Benson and Aaron Moorhead bring you Sping.  A love story with a difference.  With amazing taglines such as

"Love is a Monster"

"Over time, every girl gets weird."

"I gotta make sure you're the kind of crazy I can deal with!"

...you know you're in for a bit of a freaktarded time.  And it sounds like someone in a relationship with ME!!!  HAHAHAHAHA.  ;)

Check out the new trailer and see what you think....and also check out Resolution too and go LIKE Spring on Facebook and follow them on Twitter @SpringTheMovie.  Oooh, also check out this post I wrote before regarding the film and also HERE where I'm nerding about them when Resolution came out.  MWAH! :)

Posted by morleysaurus at 01:50 No comments: Links to this post