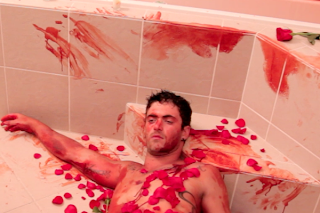 So the horror genre has a long history of being known for women being used for their lungs....and their, ummm....lungs!!!  Yes people, tits and scream queens are two things that are synonymous with horror and unfortunately, it's a reputation that has long tainted the idea of women in horror in general!  Those days are soon to be a thing of the past though!!!  With such a strong undercurrent of female talent emerging from the dirty underworld, like blood seeping down the string of a tampon and making its mark on your pretty white pants and it ain't shifting!  Although the movies and talent are awesome, bloody pants...not so much!

Anyhoo, so guys that were at Jennifer's Bodies last night got the chance to witness Elisabeth Fies wonderfully bloody short PSYCHOSEXUAL!!!  Now wolf whistles and Leigh's pee pee comments aside, this did seem to go down a treat.  Actually, the wolf whistles and pee pee comments made it even more enjoyable.  I forgot how much fun it was to objectify men.  So used to it being the other way round, especially having worked in a pub!  No wonder Lis had such a hard job finding someone for the role, American men do NOT like to be objectified apparently.  British guys are just the same, haha.  Yes, the guys who have to have tits in their daily paper, hate to be the ones being objectified. 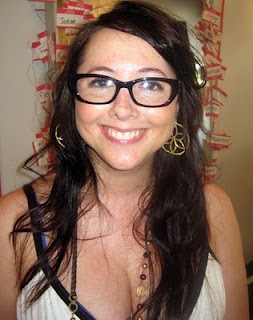 With all this in mind, how would you then like to be counted in as a producer on IMDb for the feature film version of PSYCHOSEXUAL!?!  Hell, even an Associate Producer?  And here's the genius part...you know when you see actors/producers/directors, hell, anyone...listed under a different name?  It could be married names, alter ego's, even if they so choose, their porn star name.  Well, this is the chance for YOU to get your porn star name as a producer credit on IMDb, AND help support a film that is quintessentially a super awesome chick taking matters into her own hand and turning the knife on the male of the species.
There are lots of other ways to contribute and perks that you can get, including signed pictures, thank you in the end of the short, the feature...hell, if you want I'm sure we could arrange a perk of having some of the Victim's hair sent to you with a photo...that's totally psycho sexual, I think it could work...Lis!?!  That's not too creepy is it?  ;)  So yay, either click on the link at the side of my page or here to get to the page where you can find out all the fun quirks of supporting this amazing woman and her beautiful film. <3
Posted by morleysaurus at 21:45