20 Years Today Since My Beloved Jeffrey Dahmer was Caught! 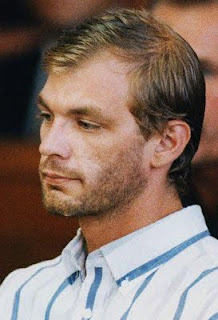 Today marks the 20th Anniversary of the day that my beloved Jeffrey Dahmer was arrested...ending a 13 year killing spree that had started when Jeff was only 18 years old.  By the time he was caught he had killed 17 men.  Had the police officer that had stopped a drunken 18 year old Jeff with the body of Steven Hicks in his car actually looked in the bin bags in the back of the car that Jeff claimed to be clippings from the garden, he might still be alive today.  As would 16 other men!  And I'm pretty sure that officer would be able to live his life with a clearer conscious. 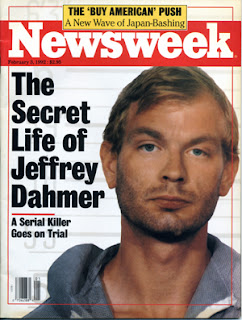 Dahmer was an incredibly troubled young man, and one that slipped through the eyes of the authorities on so many occasions.  People may deem my fascination with Dahmer to be a sick one but I adore this man, he really does truly fascinate me a great deal.  After the death of Steven Hicks it would be another nine years before Dahmer would kill again.  Ashamed of the fact that he was gay, he always said that he believed the trigger for the  four year killing spree that led to his imminent arrest, came when a man slipped him a note whilst he was sitting in the library offering him oral sex.  Soon after, after one of his drinking binges, he awoke the next day with the bruised and battered to death body of Steven Tuomi lying next to him.  He had no recollection of the murder and stuffed the body into a suitcase before disposing of it. 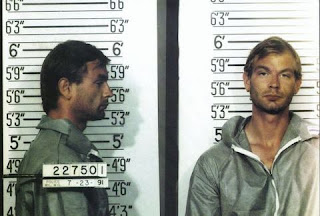 After this Dahmer went on a sporadic killing spree where he would kill another 15 men, including 14 year old Konerak Sinphasomphone, the brother of a boy he had been arrested for molesting.  The twisted thing about Konerak is that he escaped whilst Dahmer was out, naked, bleeding and bruised though the cops ended up taking the word of the charming Jeff over two African American women who claimed Konerak was trying to escape from Jeff.  Jeff said he was his boyfriend and that they had just been drinking and had too much too drink.  They took Konerak back to Jeff's apartment, leaving him to his fate at the hand of the disturbed Jeff.  The best part about this was the funky smell that filled their nostrils was the decomposing body of another of Jeff's victims...lying in HIS BEDROOM!!!  This was just another example of how crap the police in Wisconsin actually were. 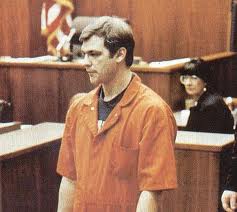 It was on the 22nd of July 1991 that Tracey Edwards escaped from Dahmer and brought the police back to his apartment, where they FINALLY clicked on to what was going on.  By that time Jeff had killed 17 men.  At the end of the day though, all he wanted was to be loved.  To find a partner who wouldn't leave him.  He wanted to create a zombie, and attempted on several occasions by drilling a hole in his victims head and pouring acid into it to keep the body 'alive'.  When everything came to trial it wasn't a case of whether or not Jeff was guilty, it was whether he was sane or not!  And at the end of the day the body count was reduced to 15 as they couldn't find evidence of two of the men, so Dahmer was determined sane and got 15 life sentences, which totaled 957 years! 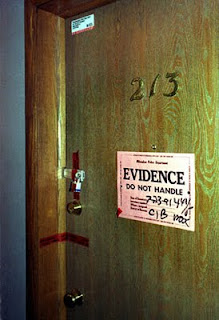 What pisses me off so much about the whole Dahmer trial is that he was clearly fucking insane!!!  He was trying to create a zombie for fucks sake!  What kind of sane person does that!?!  He was troubled and deeply disturbed.  He needed help!  What did he get though, he got left on his own with another prisoner whilst doing janitorial work in the gym.  That prisoner, Christopher Scarver beat him to death with a broom handle...or at least pretty much to death...Dahmer died from severe head injuries whilst on his way to the hospital on the 28th November 1994.  :(  Christopher Scarver said that God had told him to do it.  What the fuck ever!!!  Dahmer was a vulnerable prisoner, one who had been attacked before.  HE SHOULD NOT HAVE BEEN LEFT ALONE!!!  This was clearly a paid hit.  A message from God my fucking arse, Scarver...as well as at least some of the police officers at the Columbia Correctional Institution were 110% paid...more than likely by family members of one of the victims.  A friend of mine who lives in Wisconsin has stated that he believes it to be the Sinphasomphone family and it's a very valid point!
At the end of the day this is a tragic story, one that ended in the most horrific of ways.  I don't blame Jeff, he was a sick man who needed help.  Yet like so many he just slipped through the cracks of a broken system.
Fascinated by the story of Jeff, X Files creator Chris Carter (A.K.A. GOD!!!) did an episode based on my beloved Jeff entitled Irresistible.  When he submitted the script to the FOX executives they rejected the idea of the Jeff character Donnie Pfaster being a necrophiliac as it was unacceptable for broadcast standards.  The character was then changed to a death fetishist.  Irresistible is one of my all time favourite episodes and it is embodied in Dahmerisms! <3
For example, Tracey Edwards told police that it was almost like Dahmer shape shifted in some sense, that his face changed....like there was an inner lurking evil behind those eyes.  The character of Donnie Pfaster shape shifted to an image of the devil when he had poor Scully captured.  The cop that is assisting Mulder with the investigation mentions Dahmer -

People wondered why it took them so long to catch this kid in Milwaukee. Thought someone should have noticed he was killing all those young boys. The truth is, no one ever believed it could happen. 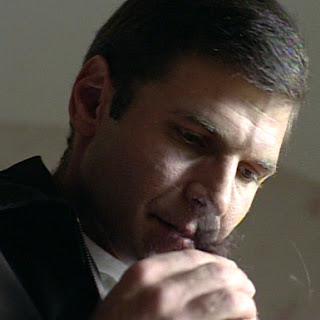 Another story I've heard was that when Nick Chinlund who played Donnie Pfaster (pictured above in character), when he was about to leave his car/trailer or whatever to start filming Irresistible, he heard on the radio that Dahmer had just died.  I so badly want this to be true.  How perfect would that be?  At least if you're a Jeffrey Dahmer/X Files geekazoid!  It is also noted that this episode actually inspired Chris Carter's spin-off show, Millennium!  Again something I would LOVE to be true!

The story of Dahmer has also been told by a few directors but my favourite of the bunch is David Jacobsen's Dahmer.  One of my all time favourite films with a performance from Jeremy Renner that just blows my mind every time I see it...and trust me, I have seen it...A LOT!!!  You can read more about my love of this movie in my article Most Beautiful Film Endings of All Time.  I love this scene below, it's one of the most adorable scenes ever...if only he didn't try to leave him afterwards. 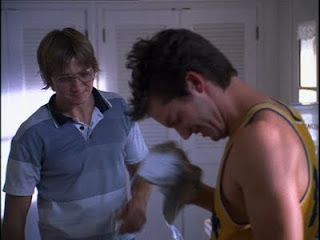 R.I.P. Jeff, I hope that in death you have finally found peace.
Posted by morleysaurus at 16:37